Interventional cardiology is now common practice in human medicine and is gaining in popularity in veterinary medicine. This practice is a non-invasive way of performing specific diagnostic and therapeutic procedures by vascular catheterization under fluoroscopic guidance.

Interventional cardiology allows us to heal or significantly improve (in a minimally invasive way) a variety of heart problems, whether congenital or acquired. 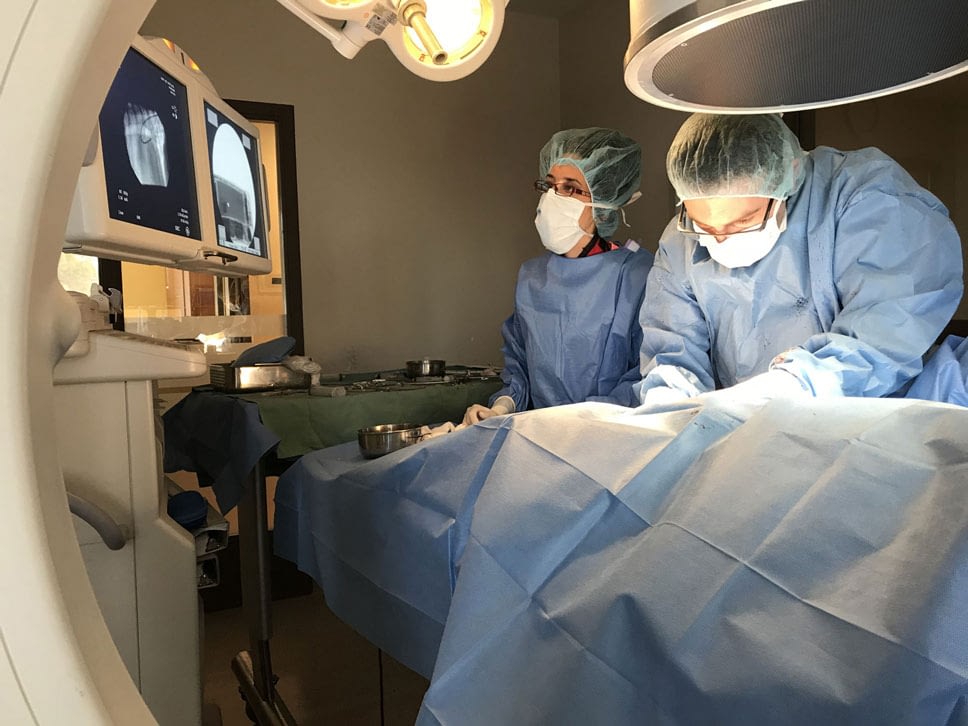 PDA (persistance ductus arteriosus) is a cardiovascular disease caused by the inability of the ductus arteriosus to fully close at birth. This allows blood to flow from the aorta to the pulmonary artery ⇒ to the lung vessels ⇒ left atrium ⇒ left ventricle. This is called a left to right shunt, which leads to volume overload of the pulmonary vasculature and left side of the heart, which causes eccentric hypertrophy. Left untreated, this disease usually leads to congestive heart failure by one year of age.

A suspicion of left side heart failure may be raised after a physical exam. A grade V-Ⅵ/Ⅵ continuous murmur (systole and diastole), similar to the noise of machinery in an engine room, is typically heard upon auscultation of the left base (sometimes deep in the axilla). A moderate intensity murmur at the mitral valve and a strong femoral pulse are also often present.

Traditionally, ligature of a PDA was performed through thoracotomy, with a high reported success rate. Because thoracotomy is an invasive and painful procedure, veterinary cardiologists have researched therapeutic alternatives, which brought us interventional surgery. These procedures allow us to avoid thoracotomies.
After more or less successful tries at occluding PDAs with thrombogenic coils, a new device made specifically for dogs was developed a few years ago (2007). This device is shaped to match the typical morphology of canine PDAs (conical narrowing as it enters the pulmonary artery) and is called the Amplatz Canine Duct Occluder(ACDO).

The procedure is described as follows: A 4cm incision is made over the femoral artery, which is dissected and isolated. Vascular access is established in the artery allowing trans-arterial insertion of long catheters and the ACDO. Angiography (contrast medium is injected with strong pressure in the aortic arch and the images are recorded using fluoroscopy) allows us to visualize the PDA, measure its dimensions and choose the appropriate sized ACDO. The latter is directed toward the PDA where it is deployed (under fluoroscopic guidance).
Obstruction of the PDA is usually complete, reducing volume overload in the left heart. The heart gradually returns to its normal size, allowing the animal to have a normal life. The ACDO is made from inert material and does not increase the risk of thromboembolism. The animal is discharged from the hospital the day following the procedure.

Regardless of valvular morphology, the defect will increase the pressure gradient across the valve and increase right ventricular workload. This results in concentric ventricular hypertrophy as well as in widening of the right atrium and post-stenotic distension at the level of the pulmonary trunk.
Left untreated, this condition can lead to right heart failure or cause syncope.

On physical exam, a systolic crescendo-decrescendo heart murmur is heard in the pulmonary area (3rd intercostal space, left hemithorax). A jugular pulse or distension can occasionally be detected.
Diagnosis is confirmed on echocardiography. Valvular morphology is characteristic (fusion of the cusps vs dysplasia). During systole, blood flow is accelerated and turbulent across the valve. Disease severity is proportional to maximal blood velocity.

Diagnosis is confirmed on echocardiography. Valvular morphology is characteristic (fusion of the cusps vs dysplasia). During systole, blood flow is accelerated and turbulent across the valve. Disease severity is proportional to maximal blood velocity.
The procedure is described as follows: A 4cm incision is made over the right jugular vein, which is dissected and isolated. Vascular access is established in the vein allowing venous insertion of long catheters and the balloon. Angiography (contrast medium is injected with strong pressure in the right ventricle while the images are recorded using fluoroscopy) allows us to visualize the precise location of the pulmonary valve at the point of maximal narrowing. The balloon is directed toward the valve (under fluoroscopic guidance) and inflated until it tears the fused leaflets and increases the opening of the abnormal valve. The balloon is inflated and deflated several times until the opening it creates is deemed to be acceptable.
Although not a curative procedure, it will usually decrease the severity of the disease and prevent symptoms from developing. The animal is discharged from the hospital the day following the procedure.